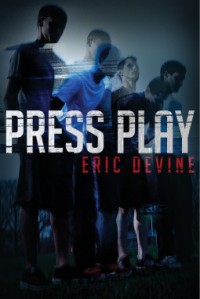 One thing that I enjoy about Eric Devine’s stories is that they are raw and real. He never down plays the story but really tells it how it is. Because folks, we live in a real world with cruel people. I’ve seen it many times on tv. Kids being hazed in the most ugly, crazy, and de-humanzing way. Kids being bullied and pressured to fit in. This story captures what teens go through today.

Plot: This is about a young boy who loves to video tape. He tries to captures what goes on in his high school halls ways and has stumbled upon some harsh hazing. He decided to investigate further going onto much trouble he never seen before. He also battles with his weight (which kids constantly make fun of him) and him just learning to survive. Really this story is gritty. At times I cringed but could not look away. This kids are so harsh and so mean. I’m not going to lie and say that this story angered me a lot. The plot is good. It captures the reader right away.

Hazing/bullying: This is the part that angered me the most. No matter who Greg went too, EVEN TEACHERS, no one would help him. They never believed him. How could they sit there and brushed him as nothing. This kid has evidence yet the schools used it against him saying it was against school polices. UGH! The nerve of these people. These kids suffered yet no one did anything to protect or save the kids.

Ending: At least the ending gave some redemption for what these kids went through but only because the kids took matters into their own hands. No adults wanted to stand up for them until they did it for themselves. And you know what? That’s what happens in today schools. No one wants to take responsibility and its the kids that suffer in the end.

I really enjoyed this story. It certainly stirred up many emotions and got me thinking. You want a good look at what goes on with teens today, read this book. Press Play is a gritty yet realistic story that is gripping.