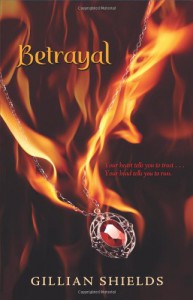 I read the first book a lllloooonnnngggg time ago, way before I was a blogger. I liked it and when Waldenbooks (AKA Borders) went out of business, I end up picking up this book. I hoped that since the first book fell a little flat for me, the sequel will pick up.

Plot: This plot remains the same as the first with a few differences. Evie is back at the border school, picking up what is left of her life. We all know that in a border school no secrets stay hidden. And before you know it, Evie is back into the same mess she was before, this time alone. I think the plot follows what most people will enjoy. It has that border school feel, with drama and lots of mystery. The beginning felt a bit slow since Evie was recapping what happened in the first book but once you hit mid-middle, things starts to pick up.

Love: I found this love to be really…strange. He is supposedly dead but not quite. Not sure if that makes any sense, but he gives her clues and helps Evie gain the tools she needs to fight evil at the school. The story also switches pov of both Evie and Sebastian. I found Sebastions pov kind of pointless. He pretty much said the same things over and over. I do however, like that his love for Evie help me stay strong.

End: The ending has a bittersweet moment in which Evie has to face loss all over again. There are  few minor characters that peaked my interest and I’m anxious to see what roles they will play in the next book.

Overall, indeed this book did pick up some. This story does give the reader a bit more meat to chew. We learn more history on the school and why the evil resides there.  Betrayal brings more emotions to the readers and more depth to the story. Betrayal is good.