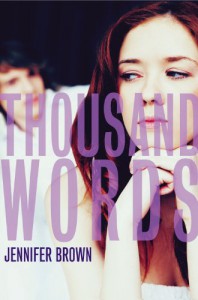 I honestly believe that this generation has it harder than everyone else when it comes to media. Social media that is. The amount of selfies taken, with young girls and guys, barely there clothing…it shocking. When I was little, there was nooo way that I would ever pose the way youth pose today. So reading this book, gave a great insight on what pressures youth go through today.

Plot: This is about a girl, who takes a nude frontal (chest picture) and sends it to her then boyfriend. They fight, breakup and for revenge, he sends to everyone on his phone list. At the time he just started college and she is a senior in high school. And the consequences are brutal. There are the students, name calling her every name in the book. Parents in a uproar over a nudity pic being passed around. Her parents, who are not only embarrassed but face serious problems with their jobs. And the ex-boyfriend. Who’s life is completely turned around and ruined all because he passed on a picture. I think this plot raising a lot of questions when it comes to self-worth and trust.  Why do you take a picture like that in the first place? Do you trust that, that photo is safe?

Friendship: When a nude photo is being passed around the internet who is your real friend? Ashleigh faces some hard times all alone. Her friend left her, calling her names and even given out her number to guys who think she is easy. It’s horrible with the amount of bullying she goes through.

Criminal Charges: This raises a issue. I understand that what Ashleigh did is wrong. What her boyfriend did is wrong. But should they face Child Pornography charges? As teens, we all do dumb stuff. And I think having that charge on your file for the REST of your life is hard. I think what they go through is enough but still. I don’t think they should have to live with this for the rest of their life. There are jobs at stake, and people would think your some kind of pervert just because you took a stupid selfie of yourself during your teens.  Personally I think the charges are too harsh. Teens still don’t fully understand what they did despite being 18 yrs old. Yes, they should be charged just not that to that extent. What do you think?

This is a great book that raises hard, real life issues that is going on with teens today. Teens face so much issues with self-worth, that they have to degrade themselves just to get the attention they want. Sometimes, I’m happy that I didn’t have this technology when I was a teen. It was hard as it is growing up with pretty girls around me, I can only imagine what teens face seeing all their “friends” risque photos on their Face Book feed. Thousand Words is an awesome book