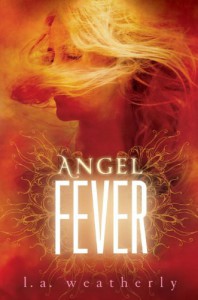 After following this series, I’m anxious to see how it will all end. For me, this story is okay, but I really expected more.

Plot: You think that after two books in a series that the plot would be somewhat different right? No. I mean, they pretty much faced the same thing they had been facing all along. Fighting with the angels, the struggle to save humanity. The only good part was…well I don’t want to ruin that part but know that this little plot twist really amped up the book for me. Finally, I got to see some good action.

Love: Now if I were to tell you what happens that it would be a major spoiler. But know that I really enjoyed this character and the plot twist. I mean, gessh I even cried a tear or two…maybe.

Ending: After all the struggle to get where they were today I felt like the ending was a bit rushed and not enough. It’s like build up…build Up BUILD UP then ….tiny bam. Not really what I was expecting but everything was nicely tied up in the end. I just thought the ending would have more of a bang you know.

Overall, this series concludes well. There are plenty of plot twists and turns to kept the reader firmly in there seat. Action-packed and full of romance, Angel Fever is delightful.